The seaside is one of my favorite places to be, and I was able to go there recently with some extended family. One day we woke up early to squeeze in some paddle boarding before a tropical storm. The wind was already picking up and the water was choppy, but we discovered that if we paddled into the wind and hugged the shore, the wind would scoot us right back home when we turned around.

My 13-year-old niece thought she might just enjoy the ride and let the wind take her where it wanted to go. In a matter of seconds, it seemed, she was a tiny dot on the horizon and the wind was continuing to take her further out! My family ran up the shoreline to try to keep her in sight while I looked around for help.

Just at that moment an official-looking guy came up to me on shore to warn me to be careful because of the tornado watch—that the wind was getting stronger—and I told him that we were well aware because my niece had just disappeared into the horizon! He went for his jet ski and rescued her.

Later he told us what we really needed to know: that the water was only three feet deep, even all the way out! The sound looked endless and deep because of the seaweed on the bottom, but if my niece had simply jumped off the paddle board she could have stood up in the water to keep from getting carried away. But she didn’t know how close the bottom was, and so the distance between us grew while she felt helpless and afraid.

Closer than we think

Many of us felt that way at some point during this pandemic, but the kingdom of God might be closer than we may know as well. It’s like the solid bottom we can stand on to keep from getting carried away by the wind of separation and isolation and fear. Jesus often said that the kingdom of God was near, or “at hand,” which is even closer than the ocean bottom to my niece. Stick your arm out and picture Jesus right there where your hand is. Jesus IS the kingdom of God in person and he was describing its nearness as he stood in front of people.

This week someone asked me, “What is the kingdom of God anyway?” It’s this great mystery that Jesus described in so many different ways, so it’s a good question, and we’re embracing all of our questions this season.

When people hear the kingdom of God, many of us get stuck on the word kingdom because it’s old fashioned and it implies rulership and authority. It is about God’s authority in the sense that Jesus is Lord over life and death, but that’s very different than rulership of an empire. People have suffered from oppressive empire ideals throughout history, but Jesus embodies a totally different kind of authority: one that vulnerably shows up alive to love.

Jesus uses several small organic metaphors to describe the kingdom of God, normal everyday miracles like seeds. They don’t look like anything special, but they contain infinite possibilities and potential. Compare this to a small act of love and kindness that changes your day. The kingdom of God is like that! And these seeds are in us, in our mouth and in our heart, as Jesus said, and they are us. We are seeds of the kingdom.

The kingdom is a treasure

Jesus also talks about the kingdom like a joyful discovery of something really valuable, and maybe unexpected, maybe something lost and longed for like a treasure. It’s like finding a priceless pearl in an oyster, or finding your lost pet, or coming back together for Sunday meetings after a long time apart, like we are now. Jesus is saying that finding God and being found by God is like that. It’s a discovery moment of something real and wonderful that makes you want more of it. He tells this story about a person who finds a treasure buried in a field and what they do next is get all their money together to buy that whole field, not just to secure their asset but to see if there is more treasure buried there! They’re allured by the potential. The kingdom of God is like that, an implied promise of what is MORE. That the best is yet to come. This promise is worth the investment of our whole lives, our whole selves, in order to fully experience it.

The kingdom of heaven is like treasure hidden in a field. When a person found it, they hid it again, and then in his joy went and sold all he had and bought that field. Matt 13:44

This is our theme verse for this season around 2212 S Broad Street in Philly, because we’re discovering again that this communion with God and others is what we’re really looking for. It’s the realest thing. It’s almost like before the pandemic we could pass by the field of this treasure and not know how much we needed and wanted it. We didn’t buy the whole field because we didn’t know how valuable it was. “Oh, there’s that church meeting I should go to. But the Eagles are playing and I gotta rest up for work tomorrow.” Or “I don’t have anybody to go with and nobody really cares if I’m there.” Or “Christians are the worst. With all the hypocrisy and harm done in the name of religion we’d be better off without it.” And so a lot of us passed by the field, not knowing what treasure could be found.

But during the pandemic we’ve faced our pain and problems in a deeper way. We’re getting closer to our longing for the real thing. We’re glimpsing treasures in ourselves and others that may have been buried for a long time. Some of us hit our own rock bottom and found some treasure there.

A season of healing and re-creation

That’s because the kingdom is here right now and not just some other place in the future. The kingdom of God got indestructibly planted into the earth through the cross, and God’s self-giving love kicked off infinite possibilities of recreation and renewal, including everything and everyone on this hurting and wounded earth. The possibility of all violence becoming peace, and everything lost being found keeps being revealed, or at least planted like a seed. I know these sound like impossible ideas, but Jesus actually came to do it, to make all things new. And he will complete this work of recreation in the end, which is really another beginning! In fact, the kingdom of God could literally be translated in some places as “recreation.” A new beginning here! When Jesus said “my kingdom didn’t come from this world,” he was talking about origin, not location now. The Spirit empowers us to be part of the work of recreation right here and now in our bodies, our relationships, our willingness to move toward our hurting and wounded parts with this vulnerable hope of becoming something new.

This is the treasure in the field, my friends. It is endless new beginnings for all of us.

The new beginning often starts with forgiveness. The grace and mercy of God reveals a new opportunity to become. Extending that to others expands the field. The kingdom isn’t a theocracy that is about God’s authority—it is a oneness with God through Jesus. We share God’s power to forgive and renew, even with ourselves.

The new beginning is about the humanization of all relationships because God became human. This means that we can understand and accept our humanness, and that we don’t give up on each other in disappointment or failure. We don’t need to solidify images of each other in our worst moments, because the kingdom of God holds out hope for our transformation. We hold out hope for the possibilities in each other because of Jesus. That’s how love works: it banks on transformation even in the acceptance of our now. Sin deforms us in myriad ways: greed and patriarchy and the lie of white supremacy—damaging ways that people are taught to oppress and miss the humanity in each other—but the kingdom of God reveals our true form. Through showing up to discover the treasure that is in each other and going for it with our whole selves, we build the Beloved Community that Dr. King envisioned.

So the purpose of the church is not to maintain a status quo (of our own or of the world), but to keep seeking new beginnings. These new beginnings are real and tangible and consequential. Not just mystical or “spiritual.” In fact, everything is spiritual because the kingdom of God is here. Our Circle Mobilizing Because Black Lives Matter team just led us to raise over 30K as a step toward economic justice for our Black covenant members! We know it doesn’t make up for the ongoing wealth gap in our country, but we want to experience some justice now. It is a taste of the age to come.

You probably already know that the more you experience the kingdom of God in your world now, the more you will hurt and long for the fullness of it. That’s why the person who finds the treasure in the field gives everything they have to buy the whole field! The potential for more healing and communion with God and each other is worth everything. Our taste of communion with God and each other keeps us longing for more. And that longing hurts like a hunger sometimes; it’s a tension between the experience of holiness now and the hope of everything included in that whole. The sample taste of what’s truly good allows us to see and feel what’s not done yet. If you have experienced the kingdom of God you will feel angry and powerless sometimes in your longing, and you might find yourself with nothing left to say except “Maranatha,” which means “come Lord Jesus.” The more we experience the nearness of the kingdom, the more our chains begin to hurt because we know that freedom is near.

Friends, I think that’s where we are right now as a church. Closer to the treasure, closer to recognizing Jesus in all of us and all of us in Jesus, closer to letting go of all we don’t need in order to buy the field and dig for the vastness of God’s love and mercy. Let’s pray for each other in our seeking, for perseverance and courage, and for assurance that we can jump off that paddle board and stand up because we have a firm place to stand in the kingdom of God. It’s here, and we find grace on the bottom, enabled to walk against the winds of fear and separation as we make our way home. 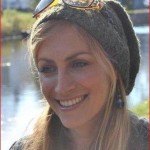 Rachel Sensenig made a covenant with Circle of Hope in 2003 and was called into pastoral leading in 2010. Before that, she worked in HIV community mental health here in Philly for 12 years with a Masters of Social Work. She is passionate about people getting to know God together, especially in the organically growing small groups that we call “cells”—like cells of a body—because God became human to be with us, and His life is magnified in us together. She is pastor of Circle of Hope in South Philly.